How much does an average wedding cost? 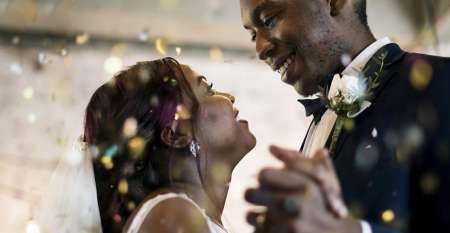 There’s a lot to think about when it comes to planning a wedding – photographer, catering, flowers, dress, to name a few. But what does the average wedding cost in the UK?

Well, the latest figures show that the average person is going to end up spending £31,974 on their big day. A survey of 2,800 couples, by Hitched and You and Your Wedding also showed that it’s venue hire that comes out as one of the biggest costs, closely followed by the honeymoon.

Average cost of a wedding venue

If you don’t know anyone that has barn, a marquee or a great hall then this is one cost you probably can’t avoid. You can’t get married wherever you want, as there are laws that dictate where a marriage in the UK can happen, so will need to pay out for an official venue.

The average cost comes in at £5,406. However, there are of course venues that will be significantly cheaper if your heart isn’t set on a stately home.

Many people get officially married in a registry office, and then have the big party elsewhere, meaning you can avoid those big costs that come with actually getting married in a fancy venue.

Either way if it’s a relatives’ garden or a manor house setting up a wedding fund is the first step.

How much does a church wedding cost?

The average church wedding costs about £500. But, there can be extras on top of this, such as flowers, having the bells rung and having use of the organ and choir.

More importantly, there are strict rules around who can get married in a church, so it’s a good idea to look into this if you want a religious service.

How much does a registry office wedding cost?

Having your ceremony at the local registry office is much, much cheaper, costing £57+ to hire the venue.

This is a pretty standard price across the country, but some might charge more at weekends, or have a variety of rooms for you to use which might vary in price.

How much does a wedding planner cost?

If you want someone to help arrange and organise your big day, you might want to consider hiring a wedding planner. But the prices vary widely depending on what you want.

Most wedding planners offer a range of services, from just helping to coordinate the wedding day, to doing literally everything for you.

It’s almost impossible to put an average cost on a wedding planner. This is because it varies not just on what you want them to do, but also the experience of your wedding planner and the size of your event.

The price could range from a few hundred pounds to several thousand.

Whether it’s a savings account or one of those novelty piggy banks, having a wedding fund and setting a budget is the first place to start.

Work out your monthly expenditure and then put whatever is left into your fund; seeing it increase each month is that one step closer to putting down that deposit on your venue or catering.

Using a budget planner can help with this. See where your biggest expense is and look to find ways to cut back.

To help you manage your money, use our free and easy-to-use Budget Planner

It’s also handy once you’ve worked out a rough cost to know how long it would take to reach that goal.

Using our savings calculator you can put in your target, how much you can save a month and what you might have saved already. It then will tell you how many months it’ll take and suggest a slight increase in savings that will help you get there quicker.

If you want to keep on top of the costs and make sure you don’t overspend, it’s a good idea to write a wedding cost breakdown, so you know how much you’ve spent and what’s left in the budget.

This depends on two things. How many people you want to feed and what kind of food you want.

On average, catering costs around £4,000 (before the cake!) but you can easily spend less, or more.

Obviously, if you want a sit-down, three course meal for 200 guests, this is really going to set you back. But, buffet and trendy food trucks can cut the cost a lot.

Average cost of a wedding cake

Like your venue, this is another area where it completely depends on your budget and your taste.

There are 4-tier options with intricate handmade sugarpaste flowers or there’s a simple 2-tier option with ribbons and a wedding topper. That said, the average cost of a wedding cake is said to be around £300.

However, this is very much an area where you can keep costs down. Opting for a single cake with accompanying cupcakes or seeing what your local supermarket offers is going to cost you far less than the average.

You can also try out making your own one (or finding a talented family member or friend), who can whip you up something spectacular for just the cost of the ingredients.

The cost of wedding flowers can vary depending on what you’re after for your big day. If you don’t want table pieces, or a statement arrangement at your venue then prices can start from £250.

For £250 most florists, asked by Hitched.co.uk, agreed that you’d be able to get a bridal bouquet, two bridesmaid bouquets, five button holes and two corsages. £500 upwards you can then expect to have some table pieces added in.

For your flowers it’s very much a case of telling a florist your budget and then working together within that price range.

Cutting the cost of your flowers

There are however a number of ways to keep the cost of your flowers down:

Choosing flowers that are in season is going to give you the best value. If you’re after flowers out of season then it’s going to cost you, as they’re going to be more difficult to source and be coming from further afield.

Decide upon your most important aspect

Think about what is most important when it comes to your flowers. If you want your tables to be the talking point then focus on the centrepieces, however if your bridal bouquets are to be the main aspect then use the majority of your budget for these.

Remember most of your wedding photos will include your bridal bouquets so perhaps your money spent here will be more worthwhile?

Flex those creative muscles and see if you make your own table decorations. Shop online or instore for cheap deals from craft stores, garden centres, or eBay and pick up some artificial flowers matched to your colour scheme.

If you really are working to a tight budget, there are plenty of people who visit the supermarket the day before to pick up bunches of flowers for just a few pounds, rather than a few hundreds of pounds.

There’s a wealth of inspiration on the internet and in bridal magazines, it’s just about shopping around for cheaper alternatives, rather than paying that wedding premium.

Want to feel more in control of your finances?

Our free and flexible Couch to Financial Fitness plan will help you build confidence to manage your money.

Step by step we can help you cut your spending, develop core saving muscles, and create better habits for the future.

Sign up for the MoneyHelper Couch to Financial Fitness plan

Average cost of a wedding dress

We’re going to hazard a guess here and say this is one area where brides probably wouldn’t want to cut corners. Finding ‘the’ dress is key in ensuring a happy bride and looking back with fond memories of your big day, but what is it going to set you back?

The answer is £1,100 (including shoes), according to Wedding Planner. However, shopping around for sales in bridal shops and even considering high street alternatives or buying second hand is going to help lower this cost.

Average cost of a wedding photographer

Much like the dress, this isn’t an area where lots of people are going to want to scrimp. The average price is around £1500, although can greatly vary depending on the package and level of experience you select.

For example, those who do this as a full-time career, and therefore more experienced, will charge more than those who do photography for a second income. You might pay more for this greater level of experience but you want a photographer to capture your day perfectly and be happy to look back at the photos in years to come.

You could cut costs by only having the photographer turn up for the wedding service itself, rather than the whole day.

The general consensus is that your photographer should be about 10% of your overall budget.

Obviously, you need to get to your own wedding. If you want to hire a vehicle to take you there in style, a wedding car is going to cost between £300 and £600.

But you might also want to think about a wedding bus or coach hire to get your guests from the ceremony to the reception. This depends on how many guests you need to transport and how long you need it for, but you’re probably looking at between £500 and £700.

You’re going to want some entertainment for the evening. The average cost for a four-piece band is between £1,000 and £1,500.

But there are a couple of things to remember. If you want a larger band, then that’s going to add to the price, as you are usually paying £250 upwards per musician. You will also want to check what the band will supply in terms of lighting and sound equipment.

Average cost of a wedding DJ

A DJ is going to cost considerably less than a band, but there are still wide variations in the cost. The average is between £200 and £800, depending on the experience of the DJ, how far they have to travel and what extras, such as lights they supply.

We know this can’t be avoided when you’re buying your dress or booking the photographer but, countless sites tell you that as soon as you say the word ‘wedding’ the quotes from suppliers can go up.

One school of thought is that if you do say ‘wedding’ you might get a better service, as for example a venue might want to go all out to help make it as much of a special day as possible. Although, on the other hand, saying it’s only a party might just save you some £’s.

Whether it’s a cake, flowers or a venue the supplier knows that they can charge more and get away with it, as it’s got that ‘wedding tag’ attached to it.

Unfortunately, if you want to get married on a Friday or Saturday then be prepared to pay more. A mid-week wedding is less popular and can therefore be cheaper.

It’s the same with the seasons, a winter wedding for example is going to be far less than a summer do; if you however hate the cold then maybe this isn’t the best option for you.

Divorce and your pension: what you need to know

Wedding ideas on a budget

Are reusable nappies worth it and how much do they cost?