How much are NHS dental charges? 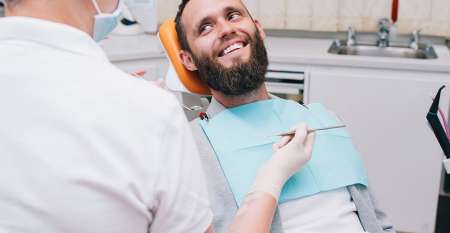 A trip to the dentist can feel a bit like a trip into the unknown. You’re not sure what might be wrong, even if everything feels fine, and then you don’t know the costs either, which is an extra toothache!

Well, we can help with the pricing bit, so here’s how much you’ll pay the NHS for the most popular dental treatments.

Want to feel more in control of your finances?

Our free and flexible Couch to Financial Fitness plan will help you build confidence to manage your money.

Step by step we can help you cut your spending, develop core saving muscles, and create better habits for the future.

Sign up for the MoneyHelper Couch to Financial Fitness plan

When you get treatment from your NHS dentist, it’ll fall into one of three bands. The simplest things, like a check-up, will be Band 1. Moderate dental work like fillings will fall into Band 2. The final band, Band 3, is reserved for the most complex work, like bridges. Here’s how much NHS bands are:

Getting your money’s worth with banding

It’s also worth knowing that if you have multiple bits of work done in one visit or one course of treatment, for example, three fillings, you’ll only pay the Band 2 fee once

Also, you’ll only pay for the top band the work is being completed under. So, if you have a check-up and your dentist says you need a filling but it can’t be done until next week, you won’t pay for a Band 1 and a Band 2 treatment – you’ll pay for the Band 1 checkup at £23.80 and then you’ll pay £41.40 after your filling.

The total amount will be £65.20, the same as a Band 2 charge, because the work is being completed under ‘one course of treatment’.

You might also be offered a service where you can get some NHS work, and then pay a bit extra to get some private work.

So, say you get an NHS check up, and it’s found you need a filling. It’s a back tooth so you can get a metal filling on the NHS, but you could upgrade to a white filling. You’ll pay a bit more than a Band 2, but the cost of the white filling and the checkup are rolled into one – you wouldn’t be paying for a checkup as well as a white filling.

If something goes wrong with some dental work done by the NHS within 12 months, it should be covered by the NHS guarantee.

That means you can go back and get it replaced for free, without shelling out again. Make sure you go back to the same dentist though.

Many people don’t know this. So, don’t be afraid to go back to your dentist if something doesn’t feel right or has chipped, cracked or broken. It might be fixed or replaced for free.

Find out more about what’s covered by the NHS Guarantee

How much do dental implants cost?

A dental implant is a false tooth that is screwed into the jaw. It replaces badly damaged or missing teeth.

Dental implants are only available on the NHS if there is a medical need for the treatment.

If you can’t wear dentures or false teeth, maybe because your face or teeth have been damaged, for example by oral cancer or an accident, you might be able to get an implant on the NHS.

People that are born with a cleft lip or palate or missing teeth might also be able to get dental implants from the NHS.

Find out if dental implants are considered medically necessary they’ll be free.

But privately they’re normally very expensive, starting from around £1,400 per tooth.

How much do dental crowns cost?

Dental crowns are quite a complex procedure. You’ll need them if the tooth is quite badly damaged and often after procedures like root canals. The tooth is shaped and a hard, tooth-shaped cover permanently cemented to the tooth.

On the NHS a dental crown is Band 3, so it costs £282.80. The type of crown you’ll be able to get will depend on which tooth is being treated and what in your dentist’s opinion is best.

If it’s a front tooth, you’ll be able to get a white crown, likely made of resin or porcelain.

If it’s a back tooth crown, you’ll only be able to get a metal tooth on the NHS, which won’t be white. White dental crowns for back teeth will start at around £550 and up privately.

How much does root canal treatment cost?

A root canal is needed when your tooth has decay very deep inside it. It’s quite a technical procedure but is covered by Band 2 NHS dental work, which is £65.20.

If you were to go privately, a root canal will often cost between £95 and £700 but would depend on which tooth needs working on.

How much does an NHS filling cost?

Similar to crowns, you’ll get white fillings for front teeth, but only amalgam (metal) fillings for your back teeth.

If you want a white (composite) filling for back teeth done privately, they’ll be between £40 and £250 depending on which teeth need filling.

How much does tooth extraction cost?

Done privately, you’d be looking at between £50 and £370 to get a tooth pulled with back teeth and wisdom tooth removal being the most expensive.

How much is a dental check-up?

Your NHS dental visit will always include the examination or check-up charge, which is a Band 1 fee of £23.80.

Dentures – or false teeth – are quite complex, so the work is covered by a few different bands.

Getting dentures created and fitted is a Band 3 treatment, so costs £282.80.

If you just need an adjustment to already existing dentures, that’s covered by Band 1 and is £23.80.

If you were to get dentures done privately, it would cost anywhere from £355 to £2,520 depending on the materials used, the number of teeth that are missing and the health of your existing teeth.

How much does a dental bridge cost?

Bridges are often used for replacing a number of missing teeth but can also be used to replace one tooth. They come under a Band 3 treatment, so on the NHS they cost £282.80.

Privately a dental bridge is very expensive, starting at around £800.

How much do false teeth cost?

False teeth are generally referred to as dentures. Getting dentures is listed above, and the initial work will be £282.80 (Band 3). Follow up additions or reworking will generally be Band 2 work (£65.20).

Dental hygienist work like scale and polish is very important to keep gums and teeth healthy.

Teeth whitening is not offered on the NHS.

Privately you’d expect to pay upwards of £300 for a professional whitening treatment.

How much do veneers cost?

Dental veneers are only available on the NHS if there’s a clinical need. This means they would need to improve the health of your mouth, not just improve how your teeth look.

As veneers are a cover for the front or back of a tooth, it’s quite rare to get them on the NHS.

If you need veneers, the NHS would do the work under the Band 3 treatment fee which is £282.80. Privately, dental veneers are very expensive, starting at around £500 per tooth.

You can get free dental care if you’re:

In Wales, dental examinations are also free if:

You may be eligible for a variety of NHS certificates, but only some will give you free NHS dental treatment. Those are:

If you’ve given birth in the last 12 months, or are currently pregnant, you can get a Maternity exemption certificate. This gives you free treatment from an NHS dentist.

Your exemption won’t expire until a year after your due date, or the birth of your baby, whichever is later.

Find out more about the Maternity exemption certificate

The NHS Low Income Scheme (LIS) offers help paying for NHS dentist fees. The exact amount of help you’re eligible for depends on your household income. Your partner will be entitled to help as well if you are.

Depending on your financial situation, you’ll get one of two certificates:

Find out more about the NHS Low Income Scheme

If you weren’t aware that you were eligible for reduced cost or free dental care and have paid NHS dental charges within the last three months, you can claim a refund for the amount you paid.

To claim back NHS dental charges, you will need to complete a:

If you claim free or reduced cost dental treatment but do not meet the eligibility criteria outlined above, you’ll be sent a NHS Penalty Charge Notice. These ask you to repay the cost of treatment as well as a penalty charge of up to £100.

Find out more about the NHS penalty charges

Do pensioners get free dental treatment?

Do students get free dental care?

Depending on your age, you may get free dental care.

If you’re older, you’ll only qualify for dental treatment paid by the NHS if you meet one of the criteria, above.

If you’re struggling to pay for dental costs and don’t qualify for free treatment or reduced costs, there are some other things you can do.

Ask your NHS dentist if they’ll allow you to pay in instalments. Some will be able to set up a payment plan to allow you to spread the cost over a number of months.

You can also get a sort of dental loan called a ‘capitation plan’. Plans like Denplan, DPAS or Practice Plan are available and can help you afford treatment by letting you pay back the costs over time.

You can also think about getting dental insurance if you know your teeth might be a problem in the future or are worried about how you’ll pay for extensive dentist work.

Policies can pay for all your work, but often there is an annual limit, and you typically have to pay the dentist then claim back the cost on your policy.

Dental insurance costs between £70 and £300 a year for complete cover. Costs are cheaper if you go for a policy that will pay for less of your treatment, for example, 50% of any claim.

Find out more in our guide Do you need dental insurance?

What is the Warm Home Discount and how can I apply?

Who is entitled to cold weather payments?

How much does it cost to adopt a child and what benefits am I entitled to?